I had the choice between buying a prebuild NAS from the many manufacturers out there or simply build my own DIY NAS Freenas Server.I decided for the latter and will show you why this is a good decision.

Why? Because it’s more fun and you can adjust the hardware to your own special needs!

Being an avid photographer, shooting in RAW file format costs a lot of disk space, so it was finally time to extend my dated 2TB single hard drive storage. (I did backups of course)

Also, I wanted to build a proper Plex Media Server for a long time already.

The budget was an issue, so I tried to find components which gave me the best bang for my buck.

I decided on the following build:

Of course, for hard drives, you can go according to your flavor, but I do recommend WD Reds or Seagate NAS drives. But keep in mind that Freenas wants 1GB of RAM for each TB of storage!

This whole setup should end up somewhere near a 1000$, I paid EU prices so the US might be cheaper.

It is powerful enough to stream in full HD to several people at the same time without a problem. (That is if your network is fast enough to handle the load.)

I decided to run with 4 hard drives in Raid-Z1 with single parity which gives me a total of 9 TB of storage. The case can handle a total of 6 hard drives, so you can go crazy if you want.

I used a 128GB Samsung SSD I still had lay around for my FreeNAS installation, total overkill, you can simply use a high-speed USB 3.0 Stick with SLC-NAND technology, which is built like an SSD, the mainboard has an internal USB 3.0 slot.

Let’s start with the build, all components together. I had an immediate liking for the Node with its slick white minimalist design. The inside of the empty case still looked spacious. Equipped with a huge 120mm cooler in the front and in the back a steady airflow to cool down the HDD’s is guaranteed. Top and inside view. I began with assembling the mainboard. Still, lots of space I thought! Time to assemble the CPU with the boxed cooler. Now the fun begins! Time to screw the HDD’s on the designated spaces. If you don’t use the full 6 slots, make sure you leave some space between your drives to provide a better airflow and overall cooling. 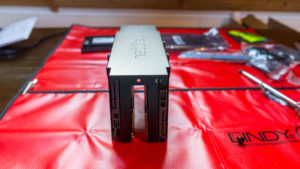 Now let’s put it all together. Side and top view. Hard to do a proper cabling job on that, I put my maximum effort in it, but there is simply not enough space 🙂 Still not too bad! After putting it all together and switching it on I proceeded to install Freenas.

So far the NAS is running without any problems. It’s very silent and consumes about 30 Watt in IDLE.

A Little edit here: I learned that it’s not good to shut down NAS hard drives, as this is reducing their lifespan drastically, so I removed the script again and the NAS runs 24/7 (except I leave home for longer periods, then I shut it down.)

So far I just run Plex and my photo library on it and am absolutely satisfied. In the future (soon as I have time) I plan to look into it more and use some other services as well.

If you wish on a tutorial on how to install Plex on Freenas and set it up properly, leave a comment, as for any questions!

Hope you enjoyed this short article and I was able to inspire you to your own build!